How To Your Save Your Inner Wonder Woman

How to Save Your Inner Wonder Woman is a guide for partners, allies, and caregivers of childhood sexual abuse survivors. It uses the DC comic book superhero Wonder Woman to heal compassion fatigue.

With Wonder Woman as an extended metaphor, the reader is taken on the healing journey of the caregiver to learn the strategies needed to practice trauma stewardship in the midst of understanding and helping male and female survivors heal from their childhood sexual abuse.

How to Master Your Inner Superman

How to Master Your Inner Superman uses the DC comic book superhero Superman to help male survivors of childhood sexual abuse understand and heal from their childhood trauma.

This self-help guide explores the use of internal family system therapy, cognitive behavior therapy, and dialectical behavior therapy to conquer the need to cope with the trauma of childhood sexual assault through the use of living life behind the façade of a false identity.

Kenneth Rogers uses writing exercises, his own autobiographical stories, and the different identities of Clark Kent, Superman, and Kal-El throughout DC comic books as an extended metaphor to help guide male survivors toward understanding how to save their inner Superboy and heal their childhood sexual abuse.

How To Kill Your Batman

How to Kill Your Batman uses the character Batman to help heal male survivors of childhood sexual abuse.

The trauma of childhood sexual abuse is related to the childhood trauma in Batman’s story, when a young Bruce Wayne witnesses the death of his parents. In the first part of the book, the author explores the term “Boy Code” and the societal norms of being a “real” man.

In part two, the harms of hypervigilance are explained, using Batman and the development of cognitive distortions by male survivors as a result of being sexually abused.

Part three helps survivors understand how to “kill their Batman,” allowing them to explore the need for intimacy and healing rather than hypervigilance. Throughout each part, Kenneth includes autobiographical stories of his own struggles with hypervigilance as a sexual abuse survivor striving to heal, grow, and become a “good” man rather than a “real” man. 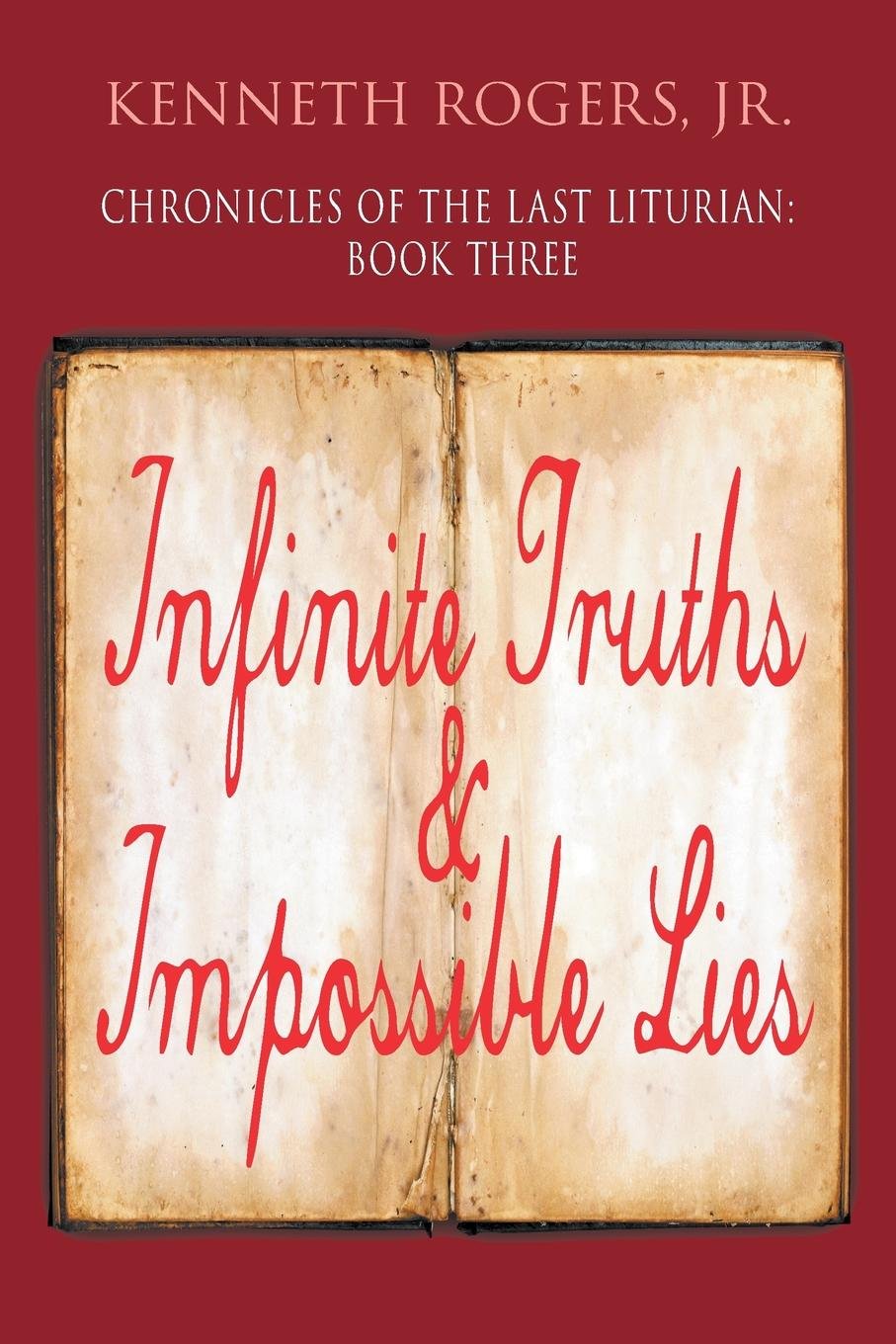 The third and final book in the trilogy, Chronicles of the Last Liturian – Book Three: Infinite Truths & Impossible Lies, answers questions about fate, and the choice between love over fear.

In book one, Kevin enters Antique Books, discovering the diary of Oliver Lee. After taking it home to read, Kevin learns of Oliver Lee’s ability to Stream stories and his search for a loving interracial couple to return the story he Streamed from their loving encounter.

In book two, a young girl, Alex, enters Antique Books in the 1960s and finds the story of Kevin, his search for Oliver Lee, and answers to Kevin’s possible connection to her. Her grandmother, GG, reveals how she knew Kevin as a boy, when she was called Jennifer.

Book three introduces Spero, the granddaughter of Alex, and the daughter of a loving interracial couple, Kevin and Jennifer. The past is finally revealed about Oliver Lee and the lies he told to save Kevin, Jennifer, Spero, and others. Their Streamed stories unveil the relationship between a young black man, Ollie, and an ambitious young white woman named Erica.

Following the Civil War, Antique Books is just being built. Erica is the owner and Ollie is her sales clerk. The young man seems odd and mysterious. His captivating stories speak of a future yet to come. Although Erica is engaged to be married, she yearns for Ollie and a future that can never be.

The Diary of Oliver Lee

The Diary of Oliver Lee tells the tale of the last Liturian, cursed and blessed with the ability to “stream” stories from the minds of others and tell the tales they can’t.

As a young boy, Kevin is pulled toward a mysterious used bookstore that only he seems able to see. He enters and meets an eccentric sales clerk who gives him the diary of a man named Oliver Lee. The boy takes the book home and reads of the old man’s lifelong search for a couple he has never met, as well as his journey through the lives of the fantastic and the ordinary to find and save their lives.

After he finishes reading the diary, the boy races back to the bookstore, but finds that it is now empty. Begin the chronicle and understand the mystery, the lies, and the truth of Oliver Lee in this unforgettable, puzzling fantasy novel, which is the first book in the Liturian trilogy.

Will Andrea and Thomas regain their full memories? What dangers will they encounter as their intense visits to the past cause a stunning affect? The riveting Sequence questions our reality, while taking the reader on a remarkable journey into the mind.

Raped Black Male tells my story of being homeless and struggling to overcome depression while coming to terms with being sexually assaulted by my sister at age eight. Beginning in my middle school years, the novel weaves its way through the ’90s to present day, as the stress of exceeding expectations of what it means to be a black male and the crippling unspoken belief that says (without saying) – it’s impossible for a man to be raped – has forced one mental breakdown after another, resulting in thoughts of suicide.

This memoir is filled with depth, humor, and honesty about the reality and myth of what it means to be a black male (not all of us can handle a basketball or football), while explaining the burden and responsibility each assigned title has had on my life, the way I prepare my seventh grade students to enter the world, and the way my shattered thoughts have forced me to interact. Using original journal entries written during my early life, each page is inspirational and told from the heart.

Chronicles of the Last Liturian: Love and Fear

Book two has arrived in the continuing story of the Chronicles of the Last Liturian.

Years have passed since Kevin first read the diary of Oliver Lee in book one of the series. The used bookstore still stands where he was given the diary by an eccentric sales clerk who then vanished, and now a little girl named Alex has wandered through its doors.

Mystified by tales her grandmother told her of her best friend, Kevin, who vanished after reading about Oliver Lee, Alex enters the abandoned bookstore and finds the same journal. After taking it home, her grandmother, GG, is furious that she broke into the store.

The story takes place as race relations and riots erupt over the summer of 1964. GG tells Alex the stories she read about Oliver Lee were fake and that he didn’t really exist. But when Alex leaves, GG begins to read the journal Alex found in Antique Books and realizes it’s the same diary from her past.

She finds Kevin has added the story of how he met GG, his ability to hear the music of crimson leaves as they sprout from the white oak near the school, and his search for Oliver Lee that can save two innocent people he believes will die if he doesn’t act.

As GG and Alex get sucked into Kevin’s world, Kevin explains his newfound ability to “stream” stories while searching for answers about Oliver Lee, Antique Books, and the deaths of the couple he’s trying to save. Is Kevin transforming into the living myth of Oliver Lee?

1 in 6 males will be sexually abused in their lifetime. This fact is often ignored or not believed.

Heroes, Villains, and Healing is a guide to help male survivors of childhood sexual abuse understand and heal from the trauma of their past using DC Comic Book superheroes and villains.

This helpful book is divided into three parts. The first is “Heroes,” which explains how some coping strategies of male survivors are similar to the archetypes of such DC superheroes as Superman, Batman, and the Flash.

The second part, “Villains,” examines how other coping strategies may not be as positive, having traits and attitudes of villains such as Lex Luthor and the Joker.

“Healing” is the final part, which explains how striving to live the life of a hero or a villain can be sustainable. To truly heal from childhood sexual abuse means working through the stages of healing and receiving help from a therapist or counselor. This final section includes writing exercises and examples that help male survivors know they are not alone, as they come to terms with their abuse and heal from past trauma.

The book was written to help male survivors open up about their abuse, seek help, and stop suppressing their trauma through drug and alcohol abuse, or suicide.

A native of Peoria, Illinois, award-winning author Kenneth Rogers Jr. is currently an English teacher for Wooster City Schools. “After writing my self-help book, Heroes, Villains, and Healing, I realized there was still more that could be written to help other male survivors. Each comic character (whether hero or villain) could be used to focus on a specific trauma to help other survivors.” His second book in the series is How to Kill Your Batman: A Guide for Male Survivors of Childhood Sexual Abuse Using Batman to Heal Hypervigilance. Coming up next is How to Save Your Wonder Woman, a guide for the partners and allies of male survivors that uses the DC comic book superhero Wonder Woman to heal compassion fatigue.